MIDI Maze is an early third person shooter, developed by Xanth Software F/X and originally released for the Atari ST in 1987. The game was subsequently converted to other platforms under other names (most commonly FaceBall 2000 or a variant thereof). 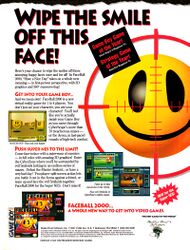 Print ad for the Game Boy and SNES versions
🇺🇸 1992