Rescue Mission is a light gun game released by Sega for the Master System. Wielding the console's Light Phaser peripheral, the player must protect a medic who travels around a battlefield to save injured soldiers by firing at enemy forces. 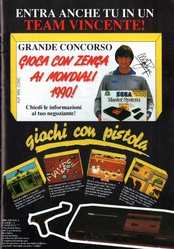 Ad for the Master System and its Light Phaser peripheral, including Rescue Mission, taken from the February 1990 issue of Guida Video Giochi