Final Fantasy V is a JRPG and the fifth main installment of the Final Fantasy series. Released for the Super Famicom exclusively in Japan in 1992, it was an object of curiosity for Western audiences — who couldn't easily experience it — until an international release (in the form of ports to the PlayStation and GBA) followed some years later.

The game takes the form of a turn-based RPG with several playable party members. To progress through the story, players must level up to increase their power and access new abilities through the class system returning from Final Fantasy III called "jobs". Combat takes place in a real time cycle of turns, also known as the "active time battle" system first seen in Final Fantasy IV.

Updated releases for the PlayStation followed, though no two regions received the same set of games. To these editions were added a new English translation, CG opening and closing movies and a variety of bonus features. These releases represented Final Fantasy V's first official English localisation. 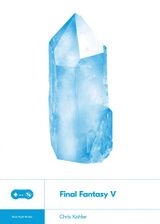 Based on new, original interviews with Final Fantasy V's director, Hironobu Sakaguchi, as well as previously untranslated interviews with the rest of the development team, Kohler's book weaves history and criticism to examine one of the Final Fantasy series's greatest and most overlooked titles.